It was only one word but it represented a milestone in New Zealand’s ethnic relations. 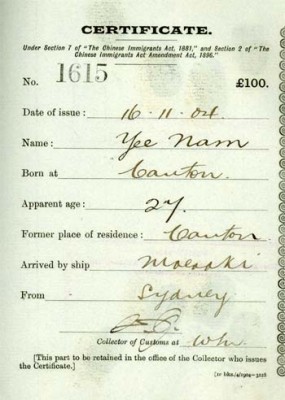 That word was ‘sorry’ and on 12 February 2002, the then New Zealand Prime Minister, Hon Helen Clark, formally apologised to Chinese New Zealanders whose ancestors had paid the Poll Tax that was imposed on Chinese immigrants during the 19th and early 20th centuries.

The Poll Tax was effectively lifted in the 1930s following the invasion of China by Japan, and was finally repealed in 1944.

The Office of Ethnic Communities led a consultation process to find a form of reconciliation appropriate to the descendants of Poll Tax payers. The community response was that government should celebrate Chinese New Zealanders’ cultural heritage and recognise their contribution to New Zealand society.

Accordingly, the Chinese Poll Tax Heritage Deed Trust was finalised in 2004 which established a community trust and a government seeding grant of $5 million.

The role of the Trust is to fund projects which encourage understanding of the history of the Chinese in New Zealand and to promote public awareness of ethnic diversity. The trustees are all direct descendants of Poll Tax payers.

Anyone interested in accessing information about the remaining legible Poll Tax payer records for the period 1888 to 1930, collected at the Port of Wellington should send their enquiries to: